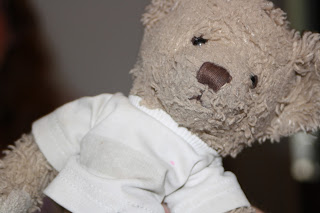 Our trip to Italy last year (I promise I will tell you all about that one day) was my younger children’s first flight. My eldest had flown once before – to Disneyland Paris (where else?!).

To commemorate this momentous occasion, I decided to buy the kids a souvenir on the plane. An Easyjet teddy. To share. He’s a pretty basic sort of bear, smallish, brown and scruffy-looking, like a teddy bear should be. He wears a Tshirt with the orange Easyjet logo on it. Very classy. And he has the name Gulliver embroidered on his foot.

Little did I know, this teddy was to become the 6th member of our family.

On holiday, my daughter took the teddy to bed with her. But he was still a shared teddy. A souvenir for everyone. During the day he stayed at the villa on his own. He was only a souvenir, nothing special.

But within a week or two he had become VERY special. Suddenly Teddy went everywhere with my daughter.

He slept with her at night. The first thing she did when she woke up would be to check her bed to locate him. Then she would carry him from her bed to the bathroom, where she would unceremoniously dump him on the floor next to the toilet. At mealtimes, he would be rammed onto the back of the chair using his Tshirt.

He went to nursery, he went shopping, he went for walks.

There are no photos of my daughter aged 4 without Teddy clearly visible.

The Tshirt got grubbier and grubbier and the logo faded. I am allowed to wash the Tshirt, but only if it is back on Teddy before bedtime.

If anyone asks his name, she always tells them Gulliver. But to her, and to us, he is just Teddy. No further explanation needed. No confusion with the other hundreds of cuddly toys we share our house with.

She still carries him 80% of the time when she’s not at school. He’s still the first thing she looks for when she gets up and he still sits on the back of chairs in his filthy Tshirt. She leaves him on her laundry basket when she goes to school. I think her bed would be comfier, but I’m not allowed to move him.

Sometimes he goes missing. The note of panic in her voice when she says ‘Where’s Teddy?’ strikes fear into my heart. I know he’s in the house, I know he can’t really be lost, but there’s always a tense few seconds or minutes as we look for him. Everyone, including her brothers, has to drop everything until Teddy is located.

Before we went to Disneyland Paris, she bravely announced that Teddy wouldn’t be joining us. I felt sick. Sick at the thought of nearly a week without him. Sicker still at the prospect of him going on holiday and getting lost.

So he came on holiday with us. Most of the time he stayed on her bed in the hotel room. If he did venture out, he had a ribbon tied round his neck, which was either attached to my daughter’s wrist, her jeans or my bag.

He had a great holiday and made it home in one piece. Now he’s happy to spend his days back on top of the laundry basket and his evenings curled up on the settee watching Horrible Histories.